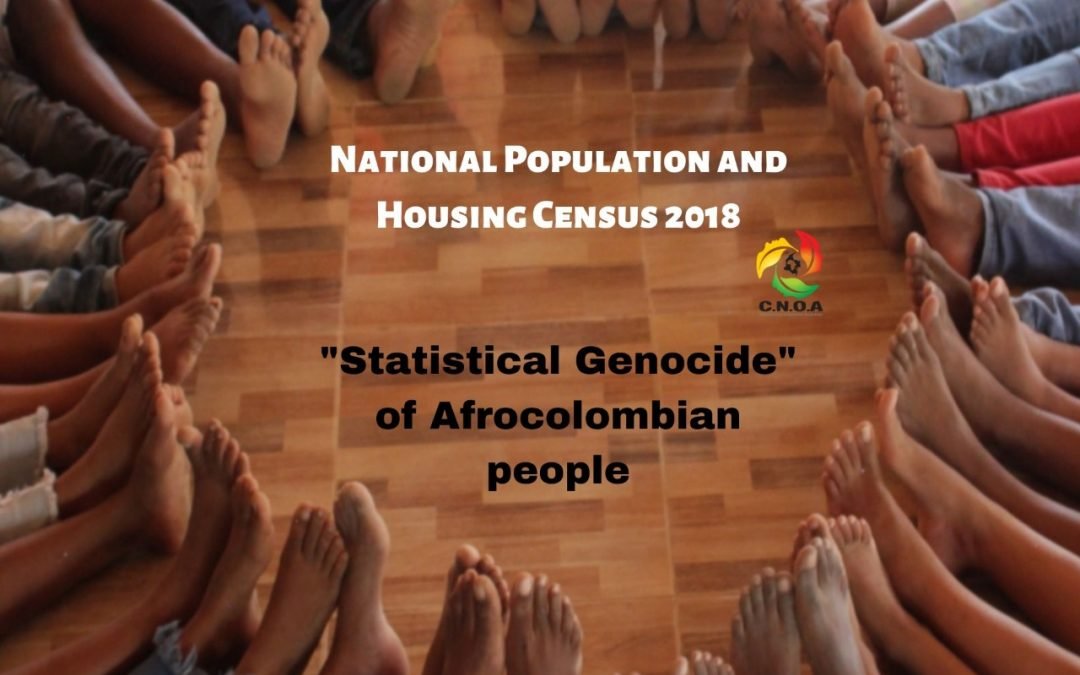 The National Conference of Afrocolombian Organizations CNOA expresses its rejection and concern for the official results of the National Population and Housing Census 2018, related to the Black, Afrocolombian, Raizal and Palenquera population exposed on November 6, 2019, by the National Administrative Department of Statistics (DANE by its initial in Spanish).

The data provided by the DANE, shows the “Statistical Genocide” which after 14 years (2005 Census), the Afrocolombian population faces again, perpetuating statistical invisibility. There is a population underreporting thus, the absence of real data that allow a true transformation of ethnic communities and therefore ratify the structural racism that affects the Black, Afrocolombian, Raizal and Palenquera population.

The results presented by Juan Daniel Oviedo Arango, director of DANE, which said that, after identifying major gaps in the census process, the Survey of Quality of Life was used to make an estimate on the self- recognition of the Afrocolombian population, because of this, the figures presented are totally disproportionate to the Afrodescendant population reality in Colombia.

The National Conference of Afro-Colombian Organizations CNOA states that these figures DO NOT represent us , nor do we accept them and that they are the result of an institutional framework that ignored the constant alerts made by Afrodescendant and Indigenous organizations, in spaces such as the First Ethnics public hearing, called by  the Attorney General’s Office in December 2017. The results are also a product of a disorganized census process, with technical weaknesses and training for users regarding the use of the electronic questionnaire, ignorance of the ethnic approach and the absence of pedagogy training processes that would allow the censors the effective approach to the question of self-recognition.

This shows that Colombian State still does not comply with the recommendations and judgments made by the Constitutional Court and International bodies as the Committee for the Elimination of Racial Discrimination (CERD) did in its periodic reports 15 and 16 in 2015, where it reaffirms the need for the correct statistical information and an adequate sociodemographic characterization of the population reality as an indispensable requirement for the formulation of public policies, their monitoring and evaluation.

Before the constant representation in the exposition made of the results by the DANE regarding the issue of the self-recognition, we declare that it cannot be treated as a simple subjective assessment, since for the Afrocolombian people means the constitutional recognition of being part of a multi-ethnic and multicultural country.  It also represents a guarantee for the fulfillment of

human rights know how many we are? Where are we? And, how do we live? it makes part of the exercise of enforcement as subjects of rights, which historically and structurally have been violated in many ways.

We declare that results like these put at risk the life and the continued existence of the Black, Afrocolombian, Raizal and Palenquera population due to, without this data is impossible to construct proposals of public and budget policies to ensure the development and protection of Afrodescendant communities in Colombia.

We urge the National Administrative Department of Statistics (DANE) to carry out actions that clearly identify:

We warm to the Colombian State, public institutions, civil society organizations, aid agencies and other institutions that the figures given by the DANE should not be used or taken into account as regards the statistical situation of Black, Afrocolombian, Raizal and Palenquera people, because as we have indicated these figures do not represent the quantitative reality of our population , and if the data is taken into account in the actions as may be building the future National Development Plan, the local development Plans or in the Framework Plan of the Implementation of Peace, the effects and actions will be inappropriate again and will not generate the changes that are required for the Afrocolombian population, but the revictimization in our communities is going to be perpetuated.

We regret that the DANE has not convened in the making process of the proposal for the methodological route, to the Afrocolombian organizations, the academy and others who for more than eight years were working in a technical way and with the people in the territories around to the census issue and the ethnic approach , and have only contemplated the gaze of the National Prior Consultation Space of the Black, Afrocolombian, Raizal and Palenqueras communities, and the pattern proposed by it which, due to the results we have today, reveals the imprecision of his actions.

In effect, The CNOA will continue in the contribution of strategies that allow us to investigate based on the existing data on what the methodological flaws were, especially towards the proposal to work on a route of adjustment and articulation of the ethnically disaggregated results that lead us to properly characterize to the Afrocolombian people given the gaps in the information.

The National Conference of Afrocolombian Organizations CNOA, as an autonomous space where more than 286 different Afrocolombian organizations converge in the national territory, again and as we have always done, we are willing to continue dialoguing and building alternatives and collective strategies that are integral in the political, technical and legal scope, in order to contribute to correct the statistics flaws, upon the Black, Afrocolombian, Raizal and Palenquera population.

We will keep taking actions to influence the improvement of these data, we will continue struggling on the processes of self-recognition, the statistical visibility of the Afrocolombian people and generating content to be disseminated by the media about how many are we really? Where are we?  And how do we live?  Questions that still remains unanswered.